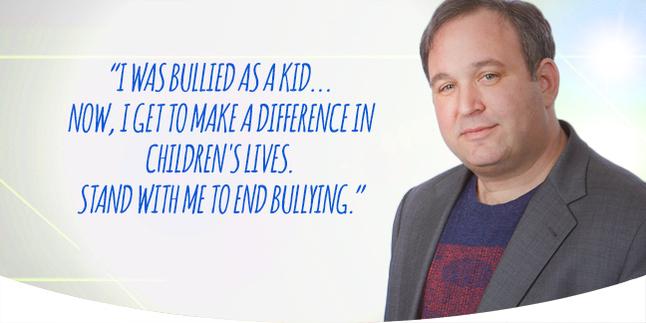 I was bullied as a kid. I have a need to educate kids on things they can do if they are being bullied, know someone WHO is being bullied and let bullies know that they have other options.

One of the camps my parents sent me to had a magic teacher. I spent the whole summer attached to his hip learning the secrets of magic. He was very kind, in fact, after camp was over he would allow me to work with him on the weekends. I spent the next couple of years working for him and his family. They taught me how to perform. My job was to set up and break down his show. Slowly he allowed me to actually perform at these family shows. I was 10 years old performing for 7 year olds. Looking back that’s quite surreal, I was a kid performing for kids. My parents were very supportive of me. My dad went to the local magic store in Manhattan and bought me my first magical effects. I practiced hard and eventually started to see my performance potential. At 10 years old I was performing as Mike Magic, and are you ready for this, Lomein the Clown.  By the time I was 15, I teamed up with a local magician and formed my first company called Razzle Dazzle Entertainment. The 2 of us dominated the Staten Island children’s show market. We got so busy that we started to book out other entertainers. 99% of our business was on the weekends.

In 1991 I decided to go to college, so that part of my business had to stop. I moved to Florida. While going to College, I met a man named Bill Malone, who was and still is one of the best magicians in the world. For some reason he liked me and asked me to work at his bar Located at the Boca Hotel and Resort. This is where I learned how to master my sleight of hand, deliver powerful performances and rub elbows with celebrities, politicians and dignitaries

In 2000 I returned to NY. I figured it would be easy to get business. Well, I was so wrong. I lost my old clients. Staten Island did not welcome me back as a magician. So I decided to look outside of that market. I decided to go to networking events in other boroughs and cities. It was a slow start, but eventually I became a sought out performer in the Bar Mitzvah and Corporate Market

Let’s fast forward to 2013. I was performing for an Ex  Governor of New Jersey, Governor Florio. He owns a law firm and he hired me to perform at his Holiday Party. I was approached by a lady asking me if I have a school assembly show. I told her that I was in the process of building anti- bullying presentation that combines magic with a bullying prevention message. I finished that evening and the next morning I got a call from her asking if I could do 7 different schools for her organization. She worked for the Arch Dioses of Metuchen NJ. That was the start of AbraCaBully.

Putting this show together was an emotional rollercoaster. As I was writing I had tears pouring down my face. See, I was bullied. I buried these feelings deep down inside of me.  I was trying to avoid making my show so personal, but I had no choice. I needed to tell my story. I felt I needed to tell the kids that they need to speak out.

The name of the program is called ABRACABULLY, The i.C.A.R.E program.I.C.A.R.E stands for, Individual, Community, Attitude, Respect and Empathy. Through this acronym, I deliver my powerful bully story and educate children on what to do if they are being bullied or know of someone being bullied. Basically, I perform magic with a message.

I have to tell you, I truly feel like I found my calling. I get to do magic and literally save kids’ lives.  Who has it better than me?

My Goals are to continue to educate myself about the problem of bullying and align myself with people and organizations That .